“This is a travesty of Justice,” says Solicitor Garry Clarke “the red wine is cold”.

The prisoners were transported to Lifford Jail

The defendants all agreed that the prison transport was very comfortable. The stylish leather seated Mercedes bus and a good pilot from Boyce Travel, made the journey a very smooth one. Aidan Cannon from TFS was a bit nervous, but Gareth McLarnon of Glen Estates allowed him sit on his knee, which seemed to silence him. Seanie Meyler was on hand to keep everyone calm, as he distributed some motivational training videos, to prepare us for the ordeal ahead. Garry Clarke prepared the defendants for the rigours of the court proceedings. And Bill Steele the Architect googled plans for the Lifford Courthouse and Jail, in preparation for a possible attempt at escape. On arrival, the Courtroom was thronged with locals for the arraignment of the accused members of Donegal Business Network and the Lifford Credit Union AGM.

A testing experience in the Jail Cells

Lifford Jail is famous for its success in holding its prisoners in high basement security cells. Getting out is not easy. For extra security, the 16 prisoners were split in to 3 groups of 5 and put in 3 different cells. One prisoner Ruth Graham was shown favouritism by Patrick the evil Jailer, so she managed to avoid incarceration. But God knows what he made her do. We heard screams…..

The three groups of death row inmates set about trying to escape, with only one hour to go before the Judge would rule on their fate. Solicitor Garry Clarke reported that there would be no plea bargaining and no leniency. And he further asserted that any of the prisoners who might possibly escape execution, would certainly be transported to Termon for life. What a terrible choice.

The team in cell 2 led by Bert the Builder Galbraith, immediately looked for shortcuts. He assessed the cell to find a weakness in the infrastructure, any sort of hole in a wall or trap door in the floor or even a dumb waiter. But the only weak link in that cell became very obvious, very soon. Things were looking bleak, as the Jailer counted down the time that allowed any chance to escape, before the Hangman’s cart was called from Browne Motors.

With tears in his eyes, Eamon Russell from Glenard Plant declared that he had brought his wife, as he could not face death without her. This story touched the hearts of all his team members, although his wife seemed less pleased. Dean Spencer of BER in Donegal fame, then admitted that he too had brought his wife Ann along. She too was in tears. He also stated that the cell would not get a BER certificate. The second bit of information seemed to be of no help whatsoever, so the group refused to pay for the report. Bill Steele said he knew the original architect of the Jail, because himself and his partner had been architects for well over 50 years.

But help was at hand, when the A Team in Cell 1 broke free on the 53rd minute. The brilliant A team was made up of Clare Ryan of ITUS Tech, Aidan Cannon of TFS, Denis Finnegan of Finn Media, Austin Blaylock of Bluestack Media and Michael MacGinty of MEANit Web Design Agency. These heroes won the day and freed their fellow prisoners, making their escape back to Letterkenny on the same luxury Boyce Coach. 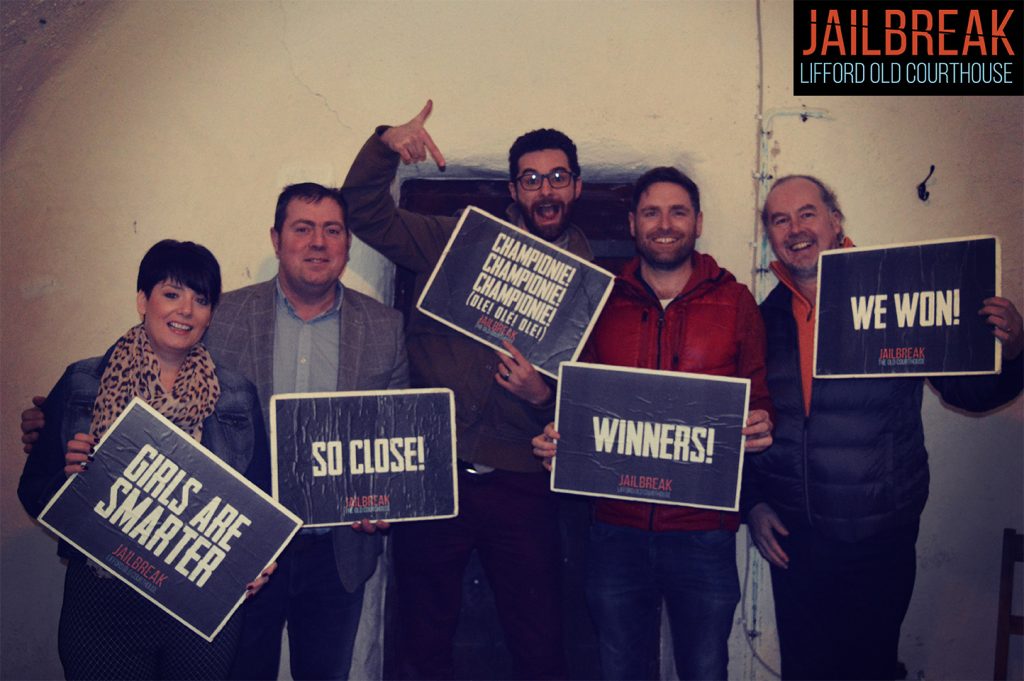 Refreshments
With the wonderful escape already a part of Lifford folklore, the escaped prisoners retreated to the warmth and welcome of McCaffertys Bar on lower Main Street, Letterkenny.

Here they were fed a great spread from The Yellow Pepper, and they were feted by Brendan Maxwell and his band of merry music makers. Refreshments were kindly provided by the hosts and a good night was had by all. Locals came to celebrate alongside the prisoners, with Trudy O’Donnell playing on stage to celebrate the success. Some history students made their way to the pub to see the prisoners first hand. The locals were truly dizzy in awe of the spectacle, with many falling on the ground in celebration.

One dark moment looked set to blight the celebrations when Manager Brendan Maxwell asked that a price be paid for all the hospitality. A song was to be sung that would get the hearts racing and bring a tear to the eyes of every local who had flocked to the hostelry. Now the prisoners looked truly worried for the first time in the evening.

What ho, cried Garry Clarke, as he offered himself up for the merry band and on to the stage. In to the hands of the Traditional musicians who were ready to accompany him with whatever sad ballad he would choose, to get the tears flowing. And flow they did within 60 seconds as Garry belted out O Sole Mio and followed up with Nessun Dorma. To save the day and stop the tears, Brendan ejected Mr Clarke off the stage and peace was restored. But tears had flowed, so the Prisoners were again free to make their escape in to the darkness of the Letterkenny night, as Garry Clarke sang ‘Just one Cornetto’.

There will be Christmas after all
Adeline Galligan was heard singing “AlI I want for Christmas is my Kangen Water filter”, as she scurried away with Colm to a secret location on the edge of town. Aidan Cannon, a wily wee Milford man, organised an escape car, driven by Sharon his first wife, which delivered the tired, but happy prisoners to their own homes around the hinterland of Letterkenny and beyond. Seanine Meyler was last seen heading for the bar in the Radisson Blu, whilst Bert the Builder disappeared, never to be seen again. Rumour has it that the fairies whisked him away. But, it could have been Susan Stevenson of Travel Counsellors who transported him to a luxury accommodation outside St Johnston for 7 nights half board.

Proof that this story is true is brought to you by Clive Wasson photography who captured the worried looking prisoners outside the Jail. It is a pity, because they had almost escaped! Also the Prison Photos show clearly how rough the conditions were in the famed jail. 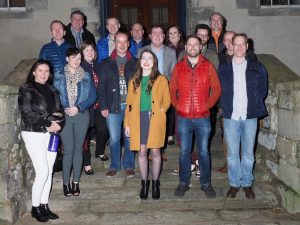 And so the DBN members live to enjoy another Christmas with their families. Spare a thought for the few people who did not escape. William Keogh, Tracy Peoples and Heather Peoples they have not been seen since. And spare a thought too for all the little children who get to have their DBN parent at home for turkey this Christmas. What a joy!

But a word of caution, the DBN Christmas Night Out is set to return next December to a pub near you.

HAPPY CHRISTMAS TO ALL, AND TO ALL A GOOD-NIGHT!