Kinnegar Beer and Wine from the Counter Deli 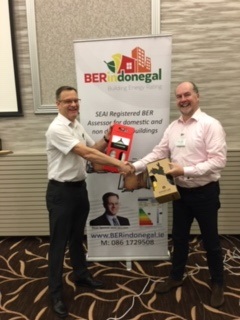 “Its a bit early for BER, but wine not”

BERs
Dean explained all about BERs or Building Energy Ratings and why someone might want or need one.If you want to sell or rent a property you will need one. They range from A to G, with A being the best.

Assessor Rating?
Dean also showed us his ratings reports from the SEAI inspectors. He has a 100% record. The inspections of his BERs are done to exacting standards and he could get ‘points’ against him if his BER reports are not done as prescribed.
If you want a BER call Dean on 086 172 9508 or email him on info@BERindonegal.ie

Door Prize
The weekly speaker provides a Door Prize, which is chosen from the people who have referred business on that morning. The winner this week was Michael MacGinty of the MEANit Web Design Agency. Michael referred two items of business for Finn Media and Floorit. The prize of a Kinnegar Brewery Beer Gift Pack and some nice Wine from The Counter Deli was warmly received.